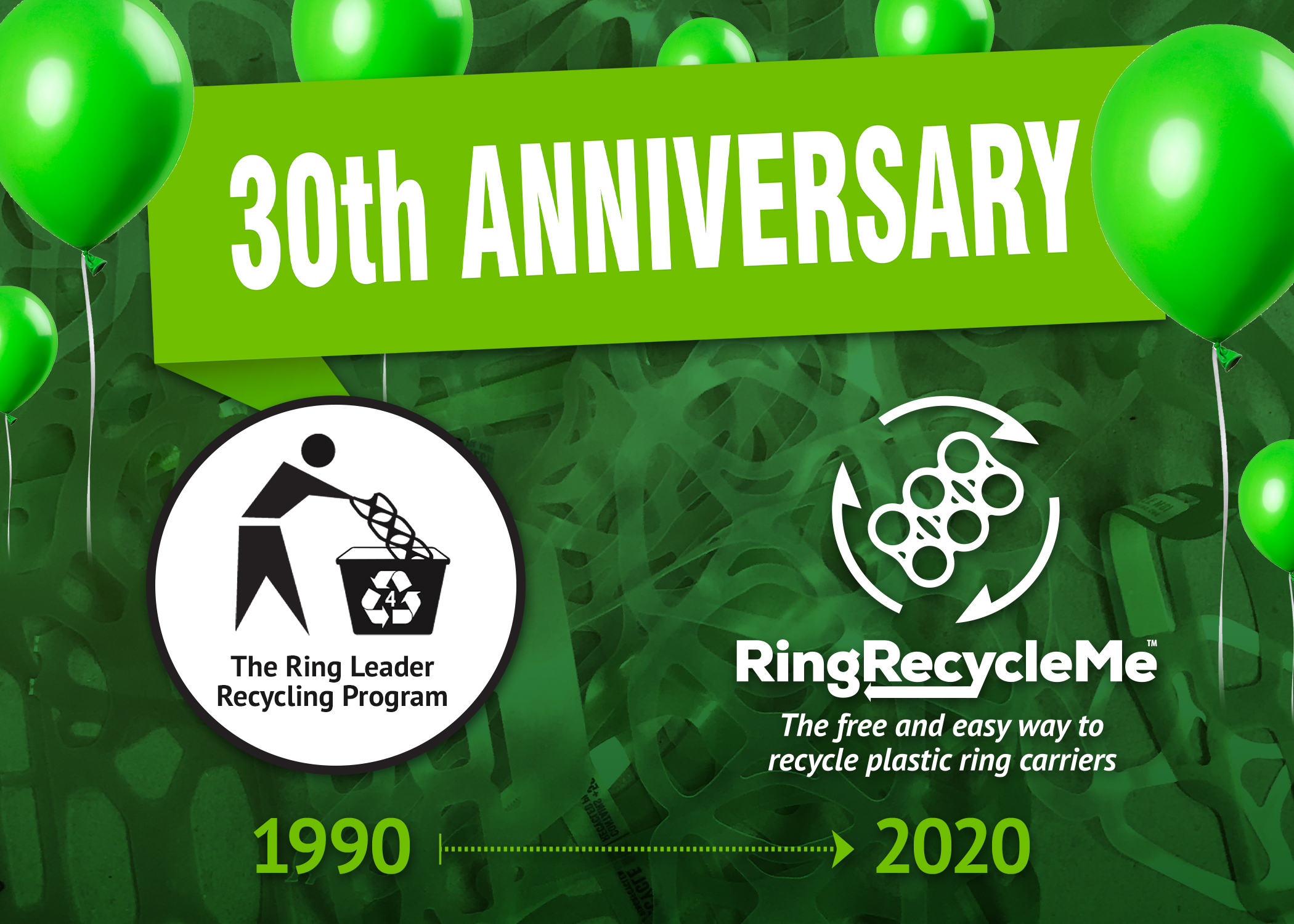 The program was launched as an educational experience, dispelling myths about six-pack rings and emphasizing the importance of the 3-R’s: Reduce, Reuse and Recycle. Additionally, the program provided a way for ring carriers to be recycled in places where #4 LDPE plastics were not collected in local programs or curbside.

In the 30 years since its launch, more than 16,000 schools, businesses and groups from around the world have participated in the Ring Leader Program, recycling over 2.7 million pounds of ring carriers. In the US, the Ring Leader Recycling Program has engaged notable partners such as Disney and Southwest Airlines. In the fall of 2017, the Ring Leader program was highlighted in Southwest, The Magazine, the airline’s inflight magazine. Southwest’s provisioning stations have collected and sent back rings for more than 10 years. However, the majority of takeback has been at a grass-roots level with school programs and recycling advocates that have taken it upon themselves to set up local collection areas. To help these collection efforts, the Ring Leader Program provided collection ‘trees’ made from recycled content themselves. These can be seen in breakrooms, cafeterias and craft beer tap rooms in the United States.

Internationally, the Ring Leader project was carried out in Spain on a pilot basis in 1992. Ten primary schools in the Barcelona area participated in the project during that school period year. Presently, more than 120 schools Spain are participating. Other advocates from around the world have set up local collection sites to get rings back to Hi-Cone facilities and our recycling partners. Returned ring carriers are made into new packaging, helping to make them into something useful and keep them out of landfills.

Expanding With The RingRecycleMeTM Program

Even before the Ring Leader Recycling Program reached this 30-year milestone, Hi-Cone had been looking for a way to further expand ring collection and recycling efforts. In conjunction with their new RingCycles™ PCR portfolio, carrier products made with 50% post-consumer recycled plastic, Hi-Cone began to roll out its wider recycling program.

Hi-Cone has partnered with different groups around the world to build on their goal of eliminating waste and promoting recycling.

In the UK for example, (www.ringrecycleme.co.uk) Hi-Cone partnered with TerraCycle at the end of 2019 and has already seen almost 500 collection sites, including both individuals and organizations, sign up and start collecting. In Spain, infrastructure is in place to collect the ring carriers in the municipally provided yellow bins, so Hi-Cone’s efforts there have been around messaging this to consumers through on-pack labels. Most recently, Hi-Cone has set up RingRecycleMe.com for use in Canada and will soon be rolling out in the United States. Similar programs are in the works for Mexico. Hi-Cone asks that interested parties in these regions continue to collect rings and be ready for the upcoming announcements on where to send them for recycling and reuse. As the RingRecycleMe™ programs launch globally, Hi-Cone will continue to support the current Ring Leader participants. Hi-Cone’s goals continue to be providing education on minimal packaging, reuse of plastic products in a circular economy, and promotion of more expansive recycling programs to include all plastic types.